What is Criminal Harassment? 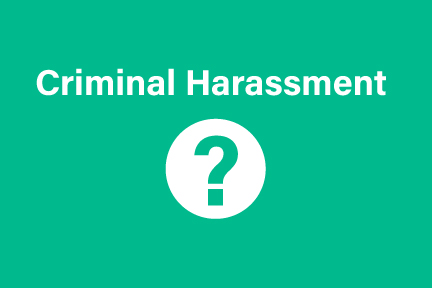 Harassment is a crime that, although defined slightly differently in each state, is usually defined as when person acts in a way designed to alarm, intimidate, annoy, provoke, threaten, or otherwise cause another person emotional distress. State and some federal laws identify multiple ways in which harassment can be committed, and harassment statues may include related crimes such as stalking or cyberbullying.
In some states, to prove certain types of harassment, there must be a credible threat to the victim, or the victim must have a reasonable fear for their safety or the safety of their family.

Examples of Behavior That Could Be Harassment

Harassment can be verbal or non-verbal. It can be done anonymously, through electronic or non-electronic means. Some examples of behavior or communication that could be considered harassment include:
- Repeatedly appearing at someone’s home or workplace
- Following someone in a public place or places
- Sending repeated unwanted text messages
- Unwanted communication on social media
- Making or sending repeated unwanted telephone calls or email messages, or causing such communications to be initiated electronically, even if no conversation actually takes place
- Making, attempting or threatening physical contact such as pushing, kicking, or striking another person
- Behaving in a way that puts the other person in fear of physical injury
- Making threatening gestures

In some states, a single incident may not be enough to be considered harassment, unless there is physical contact, there is a threat of violence or immediate harm, or the conduct is likely to provoke a violent reaction. Otherwise a pattern of behavior or multiple repeated incidents must be proven. This pattern of behavior can also help to establish intent; if the defendant was told by the victim that the behavior or communication was unwanted, but the defendant continues the conduct, it will be easier to prove that the conduct was intended to annoy or harass the victim.

Harassment Can Be a Serious Crime

Harassment is usually considered a misdemeanor, although several states allow a defendant to be charged with a felony if there were previous convictions for harassment, if the defendant has a history of other violent crime or is in violation of a restraining order, or if the harassment involves threats to commit a crime that could result in serious physical injuries.
Harassment can also rise to the level of a felony if the harassing behavior is the result of a belief or perception of the victim`s race, color, national origin, ancestry, gender, religion, religious practice, age, disability or sexual orientation, even if the belief or perception is not correct.

In addition to criminal penalties, a defendant may also be subject to civil liability for activities that constitute criminal harassment. Many states have a civil cause of action for harassment that will allow a victim to recover money damages, and most allow a victim to apply for a restraining order as a result of harassment. Typically, to recover money damages, the victim/plaintiff would need to prove harm as a result of the harassment, such as bodily harm or loss of employment, resulting from the harassment.
If you have questions about or have been accused of harassment, use our site to find a criminal lawyer who can help.