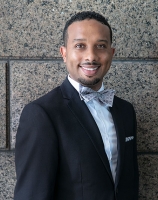 "Frank" Symphorien-Saavedra is a Florida Bar Board Certified Expert and Specialist in Immigration and Nationality Law. As the Florida Bar’s website explains, only 6% of all lawyers in Florida have earned this high distinction, which is The Florida Bar’s highest level of evaluation for the competency and experience of attorneys. Board certification recognizes an attorney’s special knowledge, skills and proficiency in Immigration and Nationality Law.

Mr. Symphorien-Saavedra has provided commentary on WVENTV—Univision, Unimas, and other local news media outlets. He has been a guest speaker on a myriad of immigration related topics, ranging from immigration reform, to state immigration statutes, among others.

A native of Venezuela, Mr. Symphorien-Saavedra immigrated to the United States when he was 11 years old. Believing in America's promise of opportunity for his children, his father worked 24-hour shifts as a taxi driver in New York City in order to bring his wife and children to the United States.

Mr. Symphorien-Saavedra attended West Orange High School in Winter Garden where he participated in the law magnet program and won a mock appellate brief competition. His promising young career was evident when he also presented mock oral arguments on his written brief before the Florida Supreme Court.

Fighting to limit delays for his clients, Mr. Symphorien-Saavedra frequently litigates cases in Federal Courts throughout Florida. Through his efforts, clients may gain a court order requiring that their case be processed at a reasonable pace. Additionally, Mr. Symphorien-Saavedra challenges legal errors by often filing appeals and petitions for review before the Board of Immigration Appeals and the United States Circuit Courts of Appeals.

Francisco Symphorien-Saavedra meets with clients regularly for personal consultations. He would be honored to assist you in achieving your immigration goals.