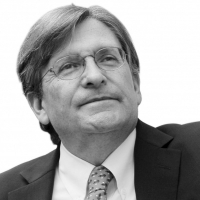 My great-uncle, the entertainer George Burns, always felt himself at a disadvantage in his business dealings because he lacked legal training, so he encouraged me to go to law school and become a lawyer.

After my second year at Harvard Law School, my first professional experience was a summer clerkship at a large Los Angeles firm. Toward the end of that summer, the senior partner asked me what kind of a lawyer I wanted to be. I told him I wanted to become a deal-maker for individuals and businesses. He said, “Then I have one piece of advice. Start your career by doing litigation and handling as many commercial disputes as you can. The best way to learn how to negotiate and draft a good contract is to see what happens when those contracts are being fought over: you learn what each clause of a contract means when a judge interprets it, what works, what doesn’t work, what happens when a contract falls apart, and how to express in writing the details of a deal which may not be tested until years later. Arguing over the meaning of a contract is the best way to learn how to put together a contract which no one can argue about.”

I took his advice. Following law school I went to a large New York law firm, where I was fortunate enough to become trial assistant to the legendary Louis Nizer, author of My Life in Court. Mr. Nizer was a wonderful role model for a young lawyer. He not only was an advocate of surpassing skill, but he insisted on meticulous preparation and attention to detail as the source of his legal accomplishments. He taught me that “inspiration” in front of a jury was the product of late nights in the library.

Even more importantly, he was a lawyer who genuinely cared for his clients, and went to great lengths to determine what their best interests really were. On many occasions, I saw Mr. Nizer refuse to bring a lawsuit for which a client was not only willing but eager to pay because he felt that the client was acting out of anger or other powerful emotion and that the lawsuit would not benefit the client’s interests. Ethical, firm and decisive, Mr. Nizer was never less than fair and courteous. I don’t remember ever hearing him raise his voice, and it was this type of professionalism that I have tried to emulate in my law practice. The lawyer exists to achieve the best possible result for the client while serving the client’s “better self” by discouraging the client from doing anything self-destructive or short-sighted.

When I started my own law firm in 1980, I continued to do litigation. Indeed, in the years to follow, my law practice has been retained by creators, producers, performers and managers for disputes involving virtually every aspect of the entertainment and media industries (theatre, film, publishing, photography and talent agencies). My law firm also has successfully represented business and individual clients in jury trials involving employment contracts and employment discrimination, partnership and other commercial conflicts, libel and business torts, and even serious product liability claims.

And I was able to transition into deal-making. In recent years I have concentrated on “hirings and firings” for senior executives and management -- the negotiation of executive employment agreements and separation agreements and the provision of HR related services to business clients.

The advice from that first senior partner in Los Angeles was invaluable: when I construct or review an executive employment agreement, I am able to view every one of its provisions, whether traditional, novel or unique to the individual deal on the table, through the prism of what that provision will mean down the line if there is a dispute between the parties. This makes for more fully thought-through and firmly-based deals. Moreover, many of our commercial litigations have ended in settlements involving complex deals in which the parties continue to maintain or re-structure their relationship, with mutual obligations “going forward.” I am proud that none of these deals has ever fallen apart or even been seriously challenged.

Most recently, in addition to representing senior executives in the financial services, media and marketing sectors which have been the foundation of our New York City-based employment practice, our law firm has done a good deal of work in higher education as well. This legal work has been enormously rewarding, since great university teachers and a profound love of learning have guided my own life, and many of the college classmates and friends I most admire have had significant careers in academia. The opportunity to assist the leaders of today and tomorrow in higher education, one of our country’s increasingly important international export products, has been both a privilege and an inspiration.

I recognize that I have been extremely fortunate as a lawyer in private practice. Not only do I admire and enjoy my clients, I have an opportunity to negotiate important issues on their behalf, which I love.

The other details of my background can be simply stated: in addition to holding my law degree from Harvard Law School, I graduated magna cum laude from Harvard College. I am admitted to practice in New York and Connecticut, as well as a number of Federal Courts, and I have appeared frequently before trial and appellate courts in both states. I have been rated A-V (highest skills and ethical ratings) by the Martindale-Hubbell Law Service for more than 25 years. I have been married for nearly 40 years, and have two grown daughters. I have lived in New Canaan, Connecticut for 30 years and am a past Trustee of the New Canaan Country School.