Can I Get a Ticket for Using My Cellphone and Driving? 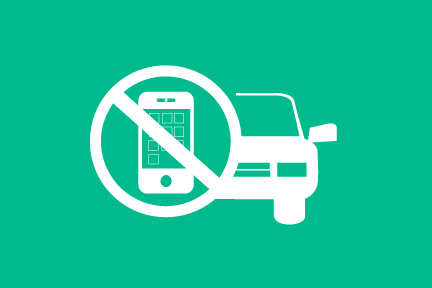 Across the United States, cellphones and other mobile devices are being used by people of all ages, from young children to grandparents, and texting has become increasingly popular.
But cellphone use behind the wheel is dangerous, and studies have shown that it can contribute to accidents, with more data being compiled all of the time; forty states plus the District of Columbia and the U.S. Virgin Islands actively collect data on the use of cellphones as a contributing factor to accidents.

Can I get pulled over just for using my cellphone?

Even where use of a cellphone is permitted, such as in states where use of a cellphone with a hands-free device is allowed, using a cellphone can be a driving distraction. Dialing, adjusting volume or Bluetooth settings, or looking up a phone number can cause you to take your eyes off the road, and using an earpiece can block out or mask traffic sounds or horns. Just having a conversation – even on a hands-free device - can distract your attention from the road, especially if the conversation is emotional or argumentative.
In many jurisdictions, you can be pulled over for distracted driving even if there is no specific law about cellphone use or texting while driving in your jurisdiction, especially if inattention leads to other traffic infractions.

Penalties for cellphone use behind the wheel

Although so far, no state in the U.S. has banned all use of cell phones across the board for everyone, each state does restrict cellphone use behind the wheel. Restrictions vary from a full ban on all cellphone use for some drivers (usually new drivers, minors or school bus drivers), to restrictions only on handheld use of cellphones in certain circumstances.
Almost all (47 out of 50) states, as well as the District of Columbia, Guam, Puerto Rico and the U.S. Virgin Islands, have banned text messaging while driving.
Penalties for breaking texting-while-driving laws vary widely from state to state. They can include fines, criminal charges, and even jail time, especially if an accident occurs and an injury or death results. In some states, receiving a ticket for cellphone use or texting while driving can also result in points on your license, license suspension or revocation, or you could be required to attend safe driving classes.
In many cases, the penalties increase for repeat offenses. Commercial drivers, school bus drivers and drivers cited for cellphone use or texting while driving on school grounds or near school property may also be subject to harsher penalties.
In addition to criminal penalties, receiving a ticket for cellphone use or texting while driving can also result in an increase in your car insurance rates. And if a lawsuit is filed based on an accident and there is evidence that use of a cellphone or texting and driving contributed to the accident, that evidence may be enough to prove negligence or recklessness. If you are the one suing, evidence that you were using your cellphone or texting and driving may prevent you from obtaining a verdict or settlement in your favor, even if the other driver contributed to or was mostly at fault for the accident.
If you have received a ticket for cellphone use or texting while driving, or if you were in an accident and cellphone use was a factor, use our site to find an experienced traffic or automobile accident lawyer who can help.