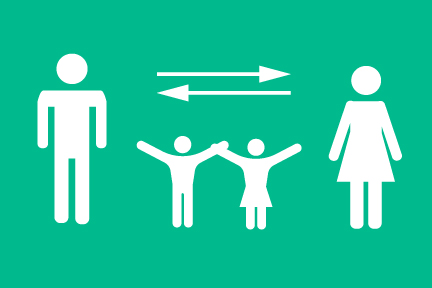 When a child is born out of wedlock or the child’s parents are divorced or separated, custody arrangements – whether entered into voluntarily or ordered by a court – determine who will live with, care for, and make decisions for the child. Each state has different rules for how custody is determined, but the same general principle applies in most states--custody is determined based upon what the court finds to be in the best interest of the child.
There are two main types of custody arrangements: physical custody and legal custody, and custody can be awarded solely to one parent (sole custody) or shared among both parents (joint custody). We explore these concepts below.

Physical custody refers to which parent(s) the child lives with. In some states, if the child spends significant amounts of time with both parents, the court will award joint physical custody, especially if the parents live reasonably close to one another.
If physical custody is awarded solely or primarily to one parent, that parent is known as the “custodial parent.” The other (“non-custodial”) parent is usually awarded visitation according to a schedule that is either agreed upon by both parents or ordered by the court. The physical custody and visitation arrangements are usually determined based upon both the child’s needs and the parents’ schedules and living arrangements.
Custody arrangements can take many forms, from one parent having custody of the child during the week and the other on weekends and holidays, to the child spending one week with one parent and the next week with the other parent, or even arrangements where the parents share the marital home, with the child remaining at the home and the parents alternating weeks in the home.

One parent can have either sole legal custody or sole physical custody of a child, or both. However, most states now seek to ensure that both parents are involved in the child’s life, and awards of sole custody are becoming less common. Courts may still award sole custody if one parent is deemed unfit, such as in cases of abuse or neglect of the child, or alcohol or drug abuse by the parent. Even then, in some cases, the court will permit the non-custodial parent to have supervised visits with the child.

As indicated above, many courts lean towards joint or shared custody for parents who do not reside together, whether those parents are divorced, separated, or never resided together. Joint custody can refer to physical custody and/or legal custody. As is the case whenever two people are involved in anything, issues and disagreements between the parents can arise in a joint custody arrangement.
In any situation where one parent violates the custody arrangement, such as by failing to involve the other parent in decisions about the child’s upbringing or not communicating about important matters and/or failing to adhere to a physical custody or visitation schedule, the other parent can go to court and ask the judge to resolve the issue and enforce the custody arrangement. However, involving the court can be expensive, time-consuming, and emotionally draining for both the parents and the child, and it is always preferable for parents to work together and resolve issues amicably, particularly after an initial custody arrangement has been ordered by the court.

Child support is usually awarded to a parent who has primary or sole custody of a child, and is paid by the non-custodial parent to help support the child. Each state has its own methods of calculating the amount of support that must be paid, which is usually calculated based on some long-established or statutory formula primarily accounting for the income earned by the parents.
Formulating an appropriate custody arrangement can be difficult, emotionally draining, and in some cases, time-consuming and expensive. A family lawyer should be consulted in negotiating and finalizing custody arrangements—whether handled in court or out of court.