How Is Income Calculated for the Chapter 7 Bankruptcy Means Test? 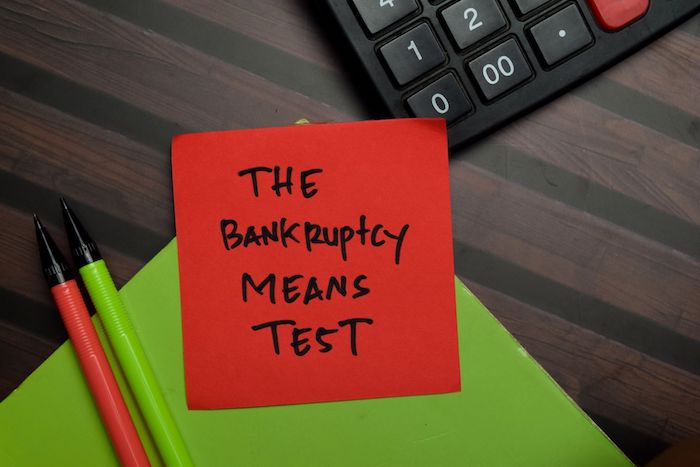 How Does the Means Test Work?

The Chapter 7 means test is a bankruptcy form you’ll have to complete and fill for your bankruptcy petition. This form is designed to calculate your monthly income taken as an average. You would take that average income and multiple it by 12 to calculate your annual income.
Your means test is done in relation to the number of people in your household. As such, you’ll have to include the income of your spouse even if he/she is not filing for bankruptcy discharge.

Where to Get a Chapter 7 Means Test Form

If you’ve finally made up your mind to file for a Chapter 7 bankruptcy discharge, one of the foundational steps to take include downloading the means test. You can get a copy at the US Courts UST website. However, there is a gamut of other information you need to complete the form.

How Do You Calculate Your Income for The Means Test?

You need the bankruptcy means test, but before calculating it, you should know your monthly income currently. This monthly income is the sum of income you’ve received in the past six months prior to filing for a bankruptcy discharge. The calculation is the same for the Chapter 7 and Chapter 13 bankruptcy. When you file for a bankruptcy discharge on the 7th of May, your CMI is calculated according to the income earned during November through the end of April, representing six months before filing for bankruptcy.

Have it at the back of your mind that the law requires that you report the sum of your household income. As such, it’s compulsory for you to include your spouse's income, even if they’re not filing for a bankruptcy discharge.

Some income that you’re mandated to include in the test include the following;
Social security income is not considered income for the means test. To sum up your monthly income, calculate the addition of your income within the past six months right before applying for a bankruptcy discharge, then divide the figure by six. You’re expected to use the gross income before any deductions are made. The only exception here is for your business income and your rental income.

Also, you shouldn’t include income gotten via the SSA (These include retirement from Social Security, SSI, and SSDI) as your Means Test monthly income. But this income should be added to your bankruptcy discharge form.

Are there any tips that help pass the means test?

You are checking to see if your income is below the income limit for Chapter 7. You’ll have to multiply your current monthly income by 12 when calculating the mean annual income. You’ll then compare this mean income to the average for your state. The annual income that falls below the given median income for the state automatically qualifies for a bankruptcy discharge. However, if your income is above median income guidelines for the state, then you’ll have to sit for another test to keep your chances of qualifying for a bankruptcy discharge alive.
If you want a seamless way of calculating a median income, then I’ll encourage you to use Ascend’s Median means test calculator.

Your means test allows you to deduct some expenses before calculating the mean test. Some noteworthy examples of those expenses include the following;
You might also be allowed to deduct certain expenses. However, you may be required to provide evidence for the expense you’re claiming. Additionally, it’s not all types of living expenses that you’re allowed to deduct.

Some expenses that fit into the term of deductible living expenses are;
There are limitations on the expenses described above. It’s imperative that you check for the maximum amount of deductible you’re allowed to make while filing for a Chapter 7 bankruptcy discharge.

Can You Estimate if I Can Qualify for Bankruptcy Based on the Means Test?