What Is a Civil Union or Domestic Partnership and How Does It Differ from Marriage? 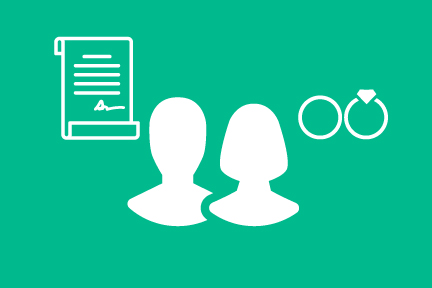 In states that recognize civil unions or domestic partnerships, usually the partners must live together for a period of time, share a domestic life together, and not be married to anyone else. In some states, to register as a domestic partner, both partners must not have been in a domestic partnership with another individual for a period of time prior to registration. They must register their partnership or union with the state or local municipality, often with payment of a registration fee.
Even if a state does not recognize civil unions or domestic partnerships, some employers will allow employees to designate a partner to receive employer benefits such as health insurance, family or bereavement leave, but this is up to the discretion of the employer. Since Obergefell, many employers have dropped these benefits and now require partners to marry in order to obtain employment benefits.

In many states, domestic relations laws apply only to married couples, which gives rise to difficulties when domestic partners want to terminate their relationship. Although it may be easy to legally sever the relationship – in many states termination only requires one partner to file a document stating the intent to terminate with the office where the partnership was registered – there are no specific laws regarding division of property, custody or visitation arrangements, or spousal maintenance. This can mean that when the former domestic partners disagree on these issues, it may be more difficult (and costly) to obtain guidance from the court because there is no action for divorce for domestic partners; each issue may need to be litigated separately, sometimes in separate courts.
If you and your partner are considering entering into or terminating a civil union or domestic partnership, or if you have questions about your legal rights under an existing relationship, get help from a qualified attorney familiar with your state’s laws. Use our site to post your legal need and to find an attorney who can help.